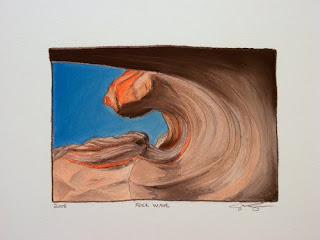 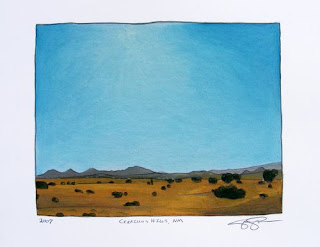 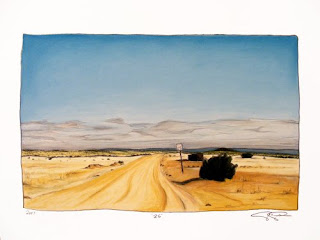 before i started trying to paint the high desert of new mexico, i was dramatically inspired by a short weekend trip to santa fe two years ago. i took a ton of pictures in those 3 days and created a whole series of drawings from them. i loved the sharp blue sky and the subtle compliments of yellow and orange on the ground and in the rocks. i loved the movement of the rock formations at tent rocks. and i loved the puffy clouds.
somewhere in doing a sketch of one of my photos, i came up with an image that played on my abstract style of blocking off a space on a white stretch of paper and giving it a hard edge, like a window. i let it be more loose and did not use a ruler to draw the lines. i marked a few places and connected the dots. then on the inside i boldy layed down my graphite lines and filled them in with my nupastel sticks. i mixed and smudged and smoothed and then went over the lines again. i ended up with a piece that could almost look like a photo from a distance, but when you got closer you could see the detail of the lines and the texture of the pastels. it was so striking i had to continue.
i sold a large piece at the WVWC art faculty show and i had a duel show with another professor at Fairmont State. the pieces were a hit...but not so much to those in the east. it was alien to them and the big skies and vulnerable spaces are scarey to some people. i'm hoping that here in new mexico they will be more accepted. i've had a few of them framed and i love the way they look. i plan to continue drawing as well as painting and hoping to eventually show both styles in a gallery or few.
Posted by Sara Shawger at 3:47 PM No comments: 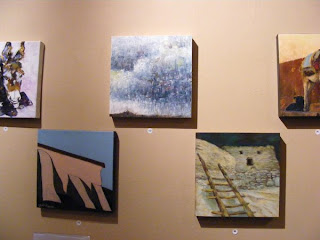 A couple of months ago I managed to get my painting into a silent auction for Open Hands at Nussbaumer's Gallery in downtown Santa Fe.  I get to say that I showed with some really great artists! There were a few from the gallery that I work at and a bunch that I had seen in other galleries downtown with huge price tags on them. These works were all 12x12 and people bid at will.
I got into the show only because one of the artists at my gallery was one of the ones in charge and she happened to have an extra canvas board in her car. I told a lot of people that I was doing it so I would have to have to finish it. One of our collector's was really interested in seeing what I could do. He went straight to my piece and put a bid on it at the auction. It was the only bid I got, but at least I wasn't one of the poor artists whose work didn't get a single bid. Now my work is hanging on the wall of an art collector as he waits to see what I do next. This gives me some good motivation, because as the blogger Artssistant says, you just need someone to believe in you to make it in this business. I have plenty of people on my side, so it's time to get painting!
Posted by Sara Shawger at 3:20 PM No comments: 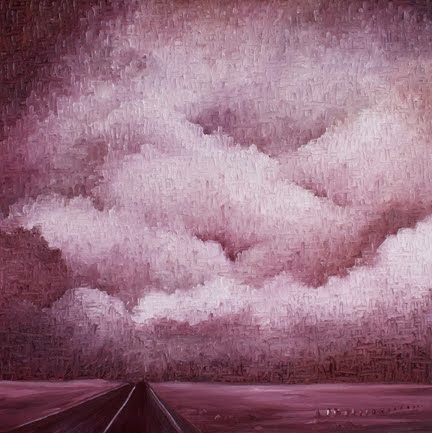 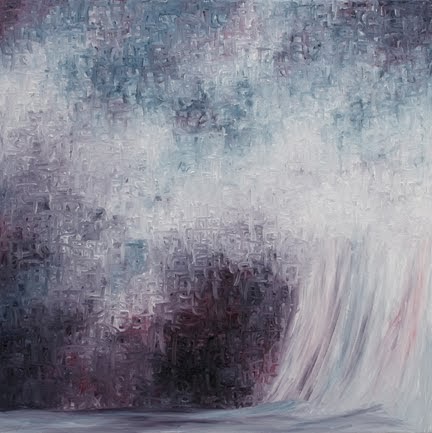 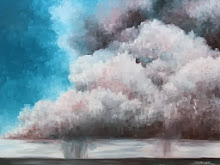